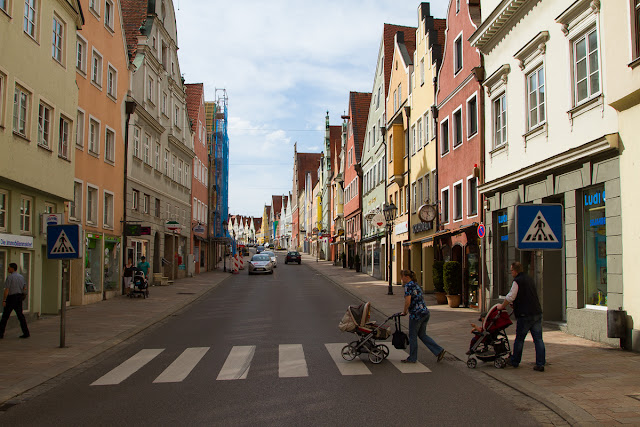 Going close to the detail shows a new perspective. The beauty of ink on paper.
Publicado por Naranja 1 comment: 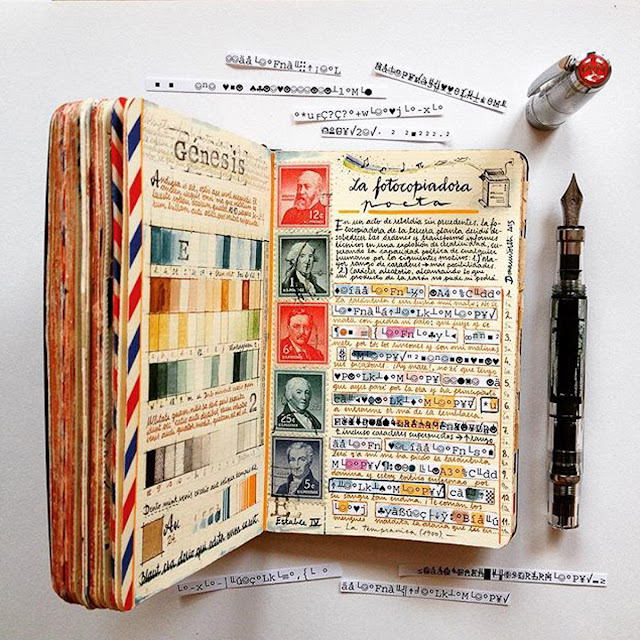 Encryption experts needed! In an unprecedented gesture of defiance the photocopier located in third floor decided to disobey orders and it transformed cold technical reports into an explosion of creativity that exceeds the capacity of any human for the following reasons: 1. Increased number of characters, then huge number of possibilities. 2. Random nature. A product of a mind can never achieve what is generated in a random field. Here I put the result as a poem compared with a human generated poem (La tempranica, 1900).
Publicado por Naranja 1 comment: 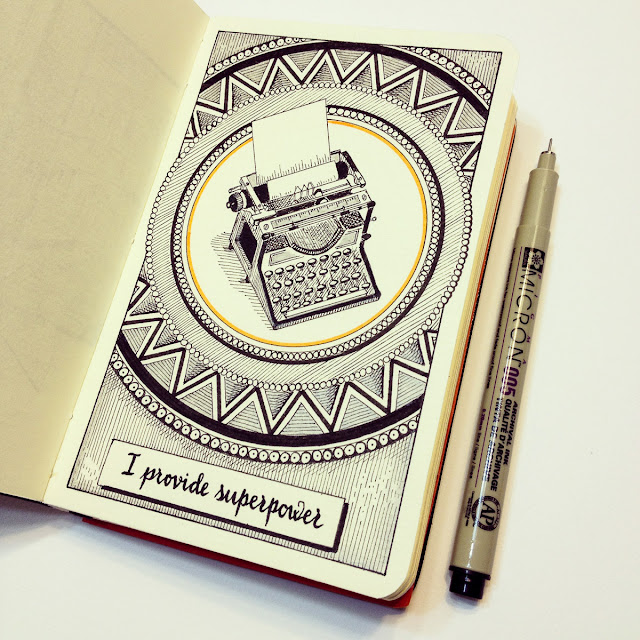 The typewriter is an amazing invention. I could stop saying here because it´s more than enough. However I will add some more letters, just to highlight its magic.

Imagine a device which you can use to write, one of the most important things for an human being, in a simple, elegant and fast way. Well, that device is not being produced anymore. Factories are using a huge amount of resources to manufacture weapons, ice cream machines or all imaginable stuff for prepare cakes and even a pool ball which predicts the future. No machines for writing. Of course there are computers and printers, but that´s another story. Also people don´t look very interested on use them nowadays. Fortunately the typewriters were produced and used in mass during the last decades. There were several in each office in the world and in most of the houses. Those machines didn´t disappear from one day to another, there are still in somewhere, maybe inside a drawer, in a penthouse, etc. Due to the lack of interest today and the high number of produced machines the price of a typewriter is almost ridiculous, I could say almost zero (or negative in some cases).

When using a typewriter the fingers touch physically the keys and you produce the letters with your own energy. This is a golden feeling. The speed of writing is directly linked to the speed of thinking, creating an unique dance where ideas are transforming into words with harmony. Sound and smell help to create that great atmosphere. Real letters appear in front of you, with real ink. Ink on paper means it´s forever (or at least one or several lifetimes, depends on you). You get nothing of these when using a computer which creates just fake illusions and temporally ones and zeros somewhere inside a digital support. For touching screens better don´t talk. No batteries, no updates, no unexpected errors, no corrupted files, no hackers and no vanish information. Of course a computer has many other advantages, but far away for the pleasure of writing.

Look the beauty of the mechanism. Simple, design based on endurance, full of quality. Times before programmed obsolescence entered into industrial design.

I used typewriters during my childhood. However I stop using them until quite recently, when I rediscover their potential. Suddenly I saw clear the power of typewriters and I went into them in a flicker. While living in Germany I found the keyword : “Schreibmaschine“. As easy as write that in eBay and hundreds of all machines are shown. Germany has been one of the best producer and there are a lot of top brands. The prices now are worthless. I realized that when I visited a flea market in Munich and a man kept a typewriter between a certain quantity of jewel-rubbish items. I just asked the price for curiosity and he replied “5€”. 5€ even before bargain! He insisted and took it with his hands offering it to me. I had the feeling he just wanted to throw it away or even pay to someone for take it. Well, I didn´t take that, but I started to buy some other models.

Smith Corona from 1936. It came with a church smell. What a design! Classic piano style with round crystal keys. Almost 80 years and it´s like new. I like to play the game to imagine its past or its former owners. I guess it´s not weird this machine were used by nazis in the WWII or maybe later someone wrote a love letter using it. 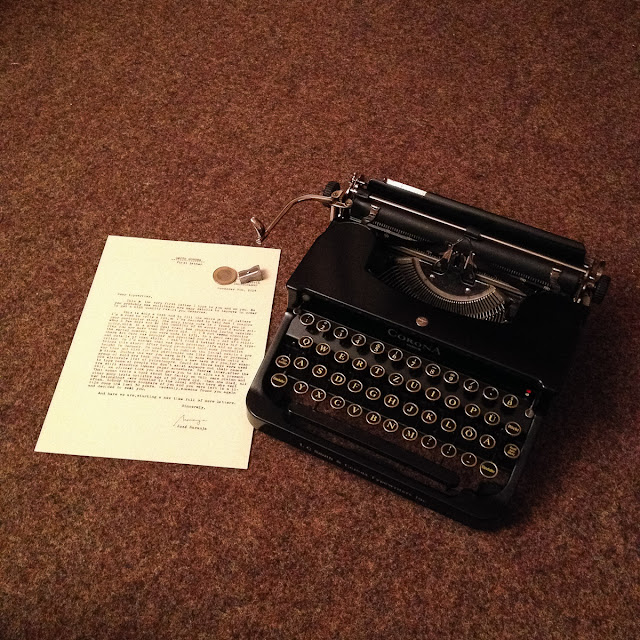 The case was not in best condition, but with a little of patience I got this amazing result. Magic! 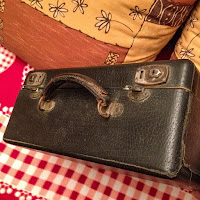 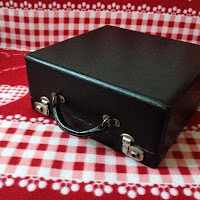 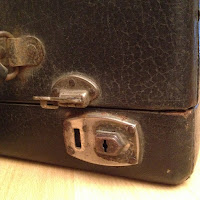 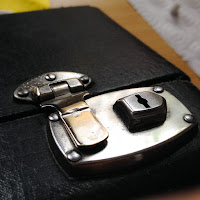 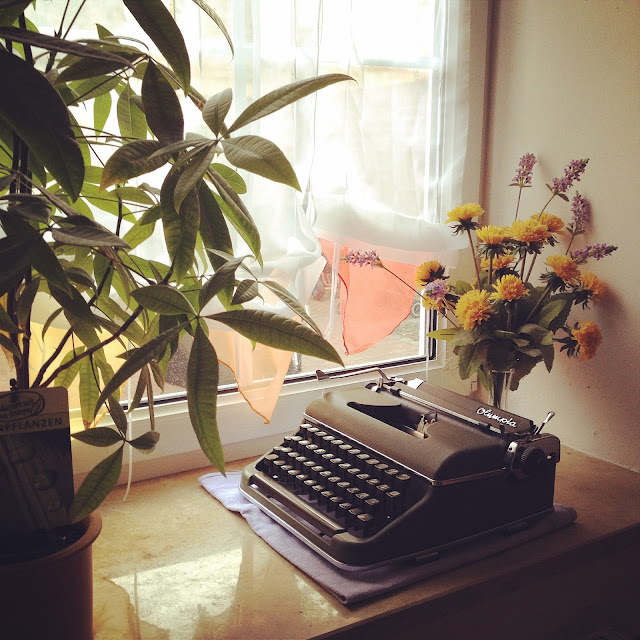 I bought this for 1€ in eBay (plus 5,95€ shipping). ONE EURO! One of the best deals I´ve ever done. Tank design, unbreakable. A similar model is used by Woody Allen, who says he is using the same machine during decades. He mentions some worth words here. 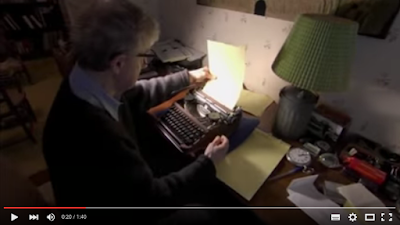 It was just dirty, but after a typewriter jacuzzy and some lubricant its bright came. Full and perfect working. 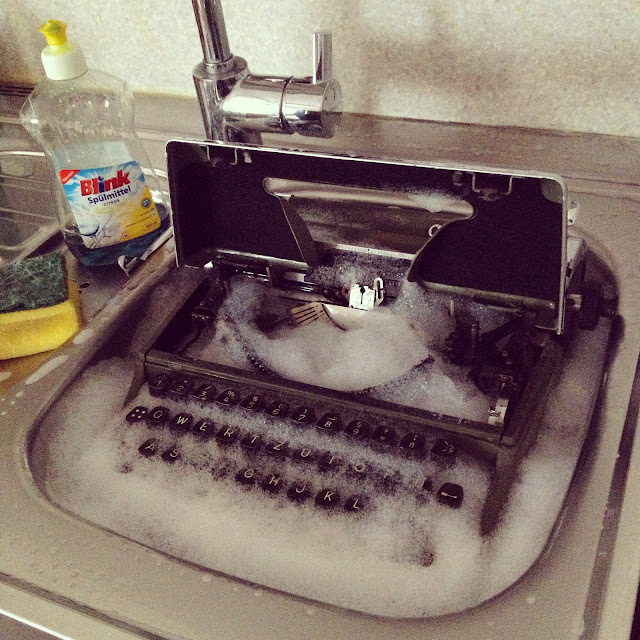 Being too curious about the mechanism forced me to practice full disassembly part by part. I could say I almost got it. A great learning lesson and enjoyable time. 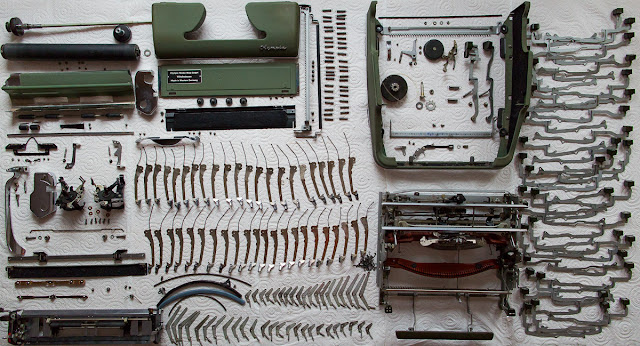 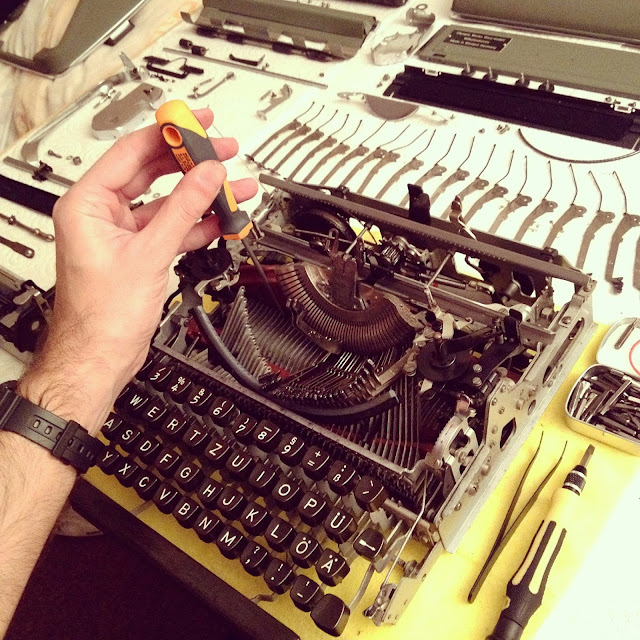 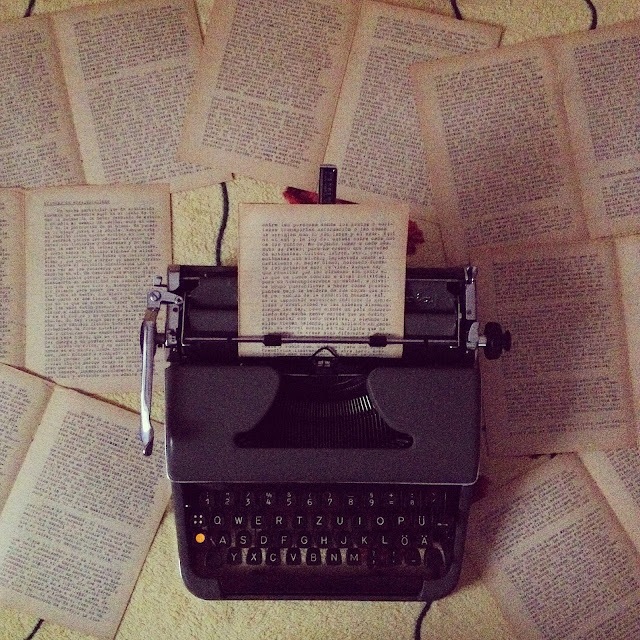 Then I got this Erika 5, which came with additional gifts. All you see in the photo for 10€. 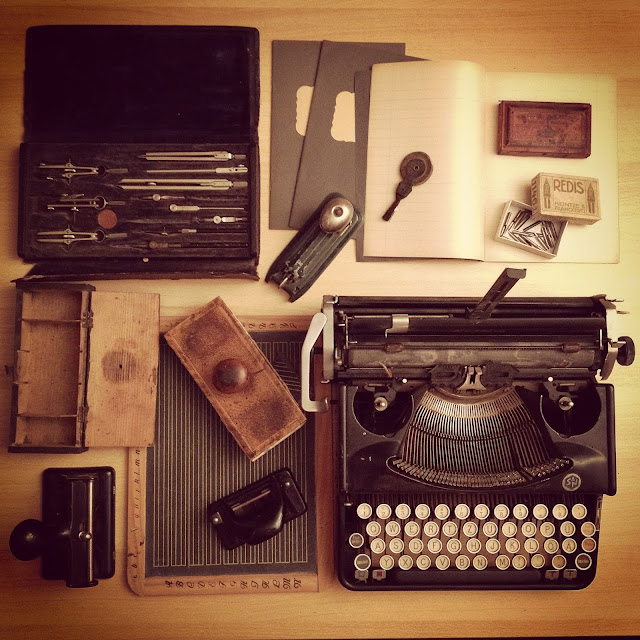 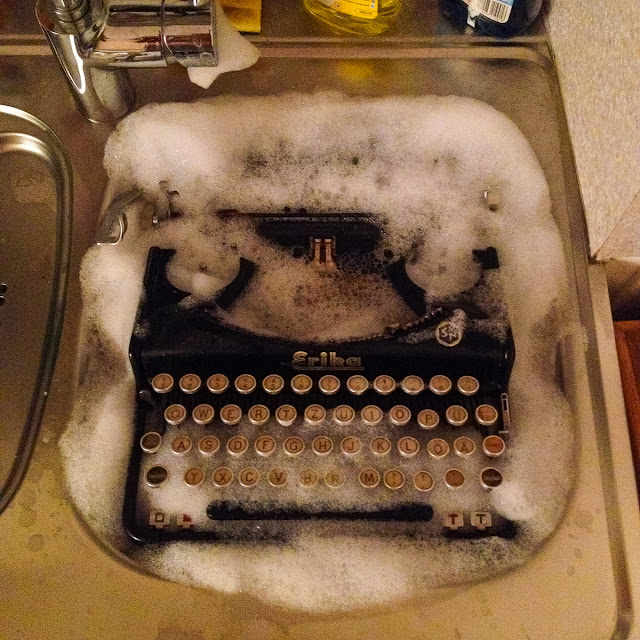 In that case I used a chemical product from the supermarket to avoid corrosion. Surprisingly that product caused a lot of corrosion suddenly! What a paradox... Don´t see the next photo if you are typewriter sensitive. Disaster. After many hours and days dedicated to clean I managed to reach this result. Thanks, WD-40! See before and after: 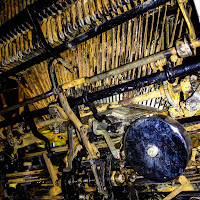 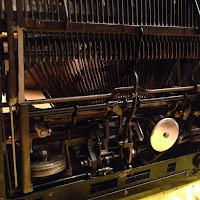 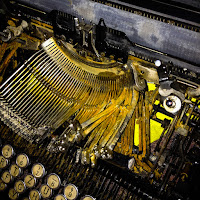 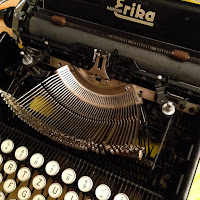 I have to say the touch of Erika 5 is superb. Fine design. 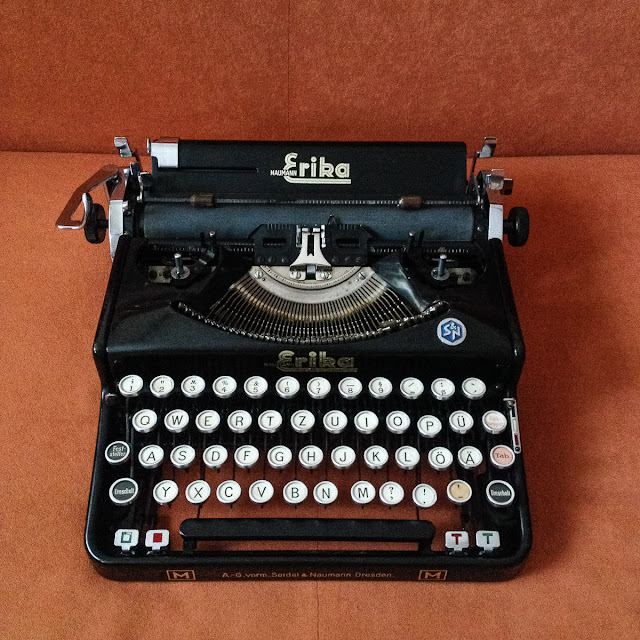 Olivetti Lettera 32. Big expectations created by opinions I read about it and a little disappointed when I had it in my hands. Its supposed design was not anything shocked to my eyes and I miss check the typo before buying it, a kindergarden mistake. Techno typography is not my favorite. At least it has Spanish keyboard. However, after start using it I was invaded by its magic. Great fine touch! So fast and a pleasure to use. Now I love it and I guess it could be perfect if the typo is a classic one.
It also had a relaxing bath and it became full cleaning and working. 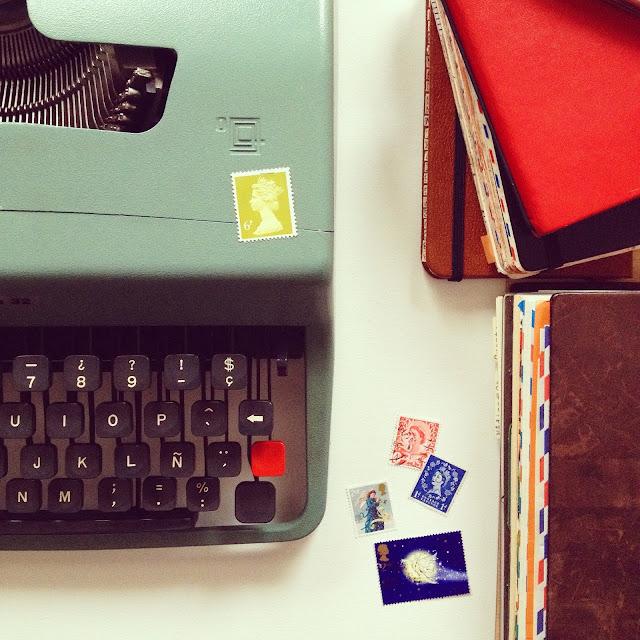 I decided stop buying more German typewriters since flying with them is difficult. I already flew with four of them, with a peak flight where I carried with me two at the same time (19,5 kg of the total weight).
Publicado por Naranja 2 comments: